NEWS: AND WE WON! 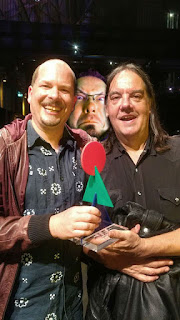 ...which is kinda funny, because we always thought Bruce was a comedy.  But we're not fussed, really: it was a fucking dark comedy, and we're definitely happy that the story-telling and characters were strong enough to impress.  So huzzah to us!

NOTE: I couldn't be there at the awards ceremony, but I did photoshop myself into the picture of Tony and Wok accepting the award. And, in this new age of "alternative facts", that seems perfectly fine and dandy.

Will ya look at all these laurels???  Woohoo!

Don't forget, the whole thing can be watched for free here: